HomeNewsIcebergs to save Cape Town from drought would be drop in the...
News 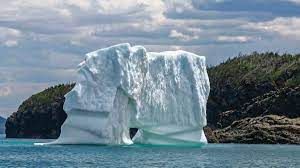 Icebergs towed from the Antarctic were proposed as an emergency source of water when Cape Town faced Day Zero in 2018.
A 300m berg would shrink so much during the months-long tow that it would supply the city for just four minutes, a US scientist has calculated.
The iceberg would supply water for five days if it was wrapped to stop wave erosion during its 2,500km journey.
After below-average winter rainfall, Cape Town’s dams are only two-thirds full and the city council says there is a strong possibility of a new drought cycle.
For more stories, go to www.BusinessInsider.co.za.
Icebergs towed from the Antarctic will not save Cape Town from running out of water if it faces another Day Zero countdown.

The plan was floated during the 2015-2018 drought, but its cost – as well as reduced consumption and the arrival of rain – meant it was never implemented.

Now a US scientist has simulated the 2,500km journey of a 300m iceberg from the Southern Ocean to the Mother City, and he says it would contain just 1% of its volume – about 2.4-million litres – by the time it arrived.

This is enough water to supply Cape Town for less than four minutes, based on last week’s consumption of 925 million litres a day.

If Capetonians were restricted to the 25 litres a day proposed under 2018 Day Zero plans to turn off mains water and set up collection points, the iceberg would supply fewer than 100,000 citizens with a day’s water.

Things look better when the iceberg is wrapped around its waterline to reduce the effects of wave erosion, says climate modeller Alan Condron from Woods Hole Oceanographic Institution in Massachusetts.

If all Cape Town’s 4.8 million residents were limited to the 3.2 litres humans need for survival, the iceberg would last three days.

The iceberg plan was floated as Cape Town’s dam levels plunged towards 20%, but the city council said at the time it would be too expensive. Instead, it concentrated on reducing consumption and setting up emergency desalination plants.

Condron’s paper, published in the journal Scientific Reports, revives the idea at the same time as the City of Cape Town is warning of “a strong indication of a possible, but not confirmed, drought cycle developing or continuing from the record low rainfall levels between 2015-2017”.

The council has set a daily consumption target of less than 950 million litres. At the height of the drought, consumption was as low as 500 million litres but it crept back up as good winter rains in 2020 and 2021 filled dams beyond 100% of their capacity.

Last winter they maxed out at only 87%, but this is still twice the amount of water the city had by the end of winter in 2017, when the plan emerged for a world-first effort to move icebergs over thousands of kilometres to relieve the drought.

More than 2,000 billion tons of icebergs break off Antarctica annually and many drift away from the continent. Condron’s model envisages capturing an iceberg near Gough Island.

It calculates the effects on the iceberg of wave-induced erosion, solar radiation and air and sea temperature, and assumes a towing speed of 0.9km/h or 1.8km/h.

At 1.8km/h, an iceberg 300m long and 250m thick would be 16.3m long and 15.7m thick on arrival off Cape Town. At half the speed, it would melt entirely 15 days before Table Mountain appeared on the horizon.

An iceberg would need to start the tow at 700m long and 250m thick to supply Capetonians’ basic needs for a year, says Codron. “However, if the iceberg is left offshore while it is harvested, the model indicates that it will entirely melt after 44 days”.

Icebergs have never been harvested for drinking water, and the 2018 scheme said open-cast mining techniques would be used. Other ideas, says Codron, include melting in a dry-dock or breaking into smaller fragments. “But it needs to be done quickly.”

On Monday, Cape Town’s six major dams were 67.7% full, the City of Cape Town said. These dams supplied 97.6% of the city’s needs last week, with 19-million litres a day coming from minor dams and 3-million litres from groundwater.

Emergency desalination plants were all decommissioned and removed after the drought broke in 2018, and in 2021 the council appointed an independent expert panel to advise it how to produce 300-million litres of water daily from a permanent desalination plant and a water reuse project.

It also plans to invest R4,7bn in projects that will extract about 105-million litres of groundwater daily by 2036. Water from the Table Mountain Group aquifer has been flowing from seven boreholes into Steenbras Dam since 2020, and more boreholes are being drilled to depths of more than 1km.

The first wellfield targeting the Cape Flats Aquifer is almost complete in Strandfontein and it will inject water into the supply network in the second quarter of the year.

Within four years, a new pre-treatment plant will be treating wastewater and injecting it into the Cape Flats Aquifer in an attempt to ensure it is consistently replenished. – Business Insider