Extreme weather events have been the “main driver” of an olive harvest collapse that could leave Italy dependent on imports from April, a leading climate scientist has warned.

A 57% plunge in the country’s olive harvest – the worst in 25 years – sparked protests by thousands of Italian farmers wearing gilet arancioni – orange vests – in Rome earlier this month. 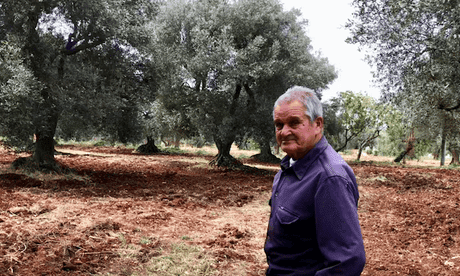 Prof Riccardo Valentini, a director of the Euro-Mediterranean Center for climate change, said: “There are clear observational patterns that point to these types of weather extremes as the main drivers of [lower] food productivity.”

He added: “Freezing temperatures in the Mediterranean are anomalous for us. In any direction the extremes are important and indeed, they are predicted by climate change scenarios.”

Several reports by the UN intergovernmental panel on climate change (IPCC) “all point to these climatic extremes as one of the major impacts of climate change”, he said. “We know there will be more extremes and anomalies in the future.” 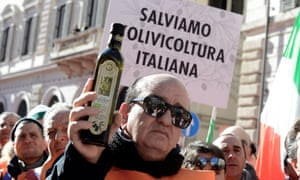 Farmers and olive growers wear orange gilets as they demand action from the government in Rome, Italy. Photograph: Simona Granati/Corbis via Getty Images

Valentini said that sudden extremes in any direction – warming or cooling, freezing or drying – can harm plant development. “Three or four days of 40C temperatures in summer, or 10 days without rain in spring – even two days of freezing temperatures in spring – are more important than the average for the year,” he said. 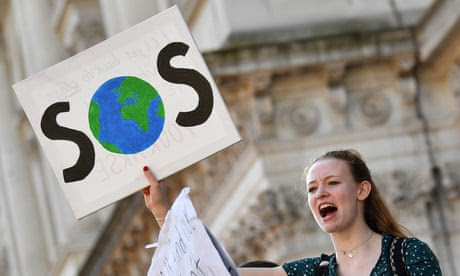 Average temperatures in the Mediterranean have already risen by 1.4C above pre-industrial levels – compared with a global average of about 1C – and precipitation has fallen by 2.5%.

In the past 18 months, Italy has experienced summer droughts, autumn floods and spring ice waves.

Olive trees are weakened by these kinds of weather shocks and, even if they recover, are left more vulnerable to outbreaks of the xylella fastidiosa bacterium and olive fly infestations, which have hit farmers in Italy and Greece, Valentini said.

Italy’s Coldiretti farmers’ union estimates that the cost of the olive oil collapse this year has already reached €1bn.

“The government promised a solution but it has not given any more resources for the olive farmers,” a Coldiretti spokesman said, adding there was “no plan for [addressing] climate change and olive oil production either.”

He said: “We have had demonstrations in front of parliament already and we are waiting for government action.” The spokesman added that if it did not materialise, “there could be more protests”.

Beyond Italy, the European commission has projected 2018-19 olive harvests to drop by 20% in Portugal and 42% in Greece, although industry sources said final figures there could be significantly worse.

The effects of cloud seeding on climate change